Since 1910 Mumble Peg has been proudly owned by the Roberts family.

Acquired by Samuel and Katherine Roberts, Mumble Peg was a quiet plot on the Macquarie River where they could farm and raise their family.

Previously, Samuel had worked as a rabbiter for the Scott family on Merrinong where he, Katherine and 10 children lived in rough conditions on the banks of the Crooked Creek.

After leaving Merrinong in 1910, the family moved to Mumble Peg where they grew from 10 to 15 children over the next 6 years. During that time, they built a small home and began to farm the land. In 1923 one of Samuel’s older son’s started planting orange trees and by 1930 the trees were producing fruit. At that time, the oranges were picked and packed into wooden crates that were carried from the orchard by horse and cart. Once a week Samuel drove the oranges on horse and cart 20 km to Narromine.

In 1942, at the age of 79, Samuel passed away entrusting Lachlan, one of 5 sons to continue running Mumble Peg.

Lachlan Roberts and his brothers continued farming on Mumble Peg and as the years went by the brothers each acquired land in various districts.

At the time, the citrus industry was growing quickly in Narromine. With over 5 growers in the area, a citrus packing co-op was formed as a way of allowing growers produce to reach the Sydney markets. With the help of his son Trevor, Lachlan created a reputation around the  delicious Mumble Peg oranges and in 1968, Mumble Peg joined the Narromine Citrus Packers. 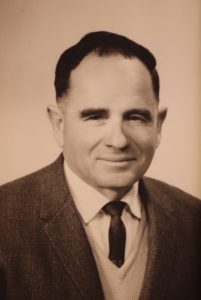 In 1978 due to illness, Lachlan passed away at the age of 68 leaving Trevor to carry on the Roberts family passion for farming alone.

At 28, Trevor had to quickly learn to manage the farm without the guidance of his father.  Growing into his roll, Trevor began his journey in shaping Mumble Peg to what it is today.
In 1985 at the age of 36, Trevor was married and by 1991 he and his wife had 4 children.

Trevor continued improve the farming operation and plant new trees to grow the orchard. He took over as the chairman of the Narromine Citrus packers after the passing of his father.

The citrus industry had many ebbs and flows over the yeas. In 2002, due to a glut in the market from imported oranges, orchards around Australia were being pushed out and farmers locally were shifting to growing cotton instead. The Narromine Citrus packers had lost 50% of growers with Mumble Peg Citrus as one of three remaining growers.

By 2013 the Narromine Citrus Packers closed and Trevor Roberts decided to build his own packing shed with his two sons Trevor Jr and Lachlan. 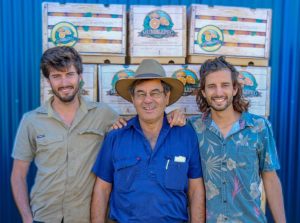 Oranges were graded and packed for the Sydney and Brisbane fresh markets.   Fruit that was rejected from the  markets for small imperfections and knowing this was still delicious fruit, Trevor decided to value add to the citrus operation and Mumble Peg Orange Juice was born.

Presently Mumble Peg Orange Juice is sold throughout central western slopes and plains of NSW and ACT in cafes, takeaway shops and supermarkets. Our table oranges are sold at Sydney Flemington Markets and Brisbane Rocklea Markets weekly and exported all over the world.

The Citrus for Trevor has always been a proud heritage from his father and grandfather. Now Trevor’s two sons, fourth generation farmers, Trevor Jnr. and Lachlan are involved in the running of Mumble Peg and the other properties.